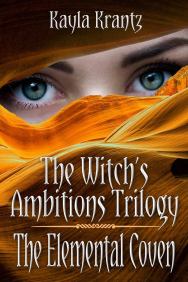 With the Land of Five being systematically torn apart by war, Ignis witch, Lilith Lace, has a number of problems before her. Captured in the Battle of Ignis by The Elemental Coven, she must deal with the recent deaths of her loved ones as a prisoner of war. Mind torn between escaping and giving up completely, Lilith is presented with a new surprise—infamous rouge witch, Willow, is not only alive and well but has a larger role in Lilith’s childhood accident than she ever imagined.

Everything’s changing. Friends are becoming enemies and enemies are becoming friends. Will Lilith finally get to the bottom of her past among the ranks of The Elemental Coven or will they hurt her worse than anything she’s encountered so far?

“So, I’m not a prisoner anymore,” I state, unsure if I mean that to be a question or not as I search the room behind her, expecting another witch to enter at any moment.

“Do you feel like you are?” she asks, propping her chin on her hand.

I shake my head.

“Good. You’ll come to like it here, I promise.”

I nod without emotion. It’s too soon for me to guess either way.

My response seems to relax her. “Let me show you to your room.”

There’s a phrase that gets my attention. In my time spent on the Council, I had been promised a room but had never actually been given one, instead being forced to bunk with other Council members. I follow without protest from the splendor of the odd room down the empty hall. It seems to be the farthest from the main portion of the manor and I wonder if there’s a specific reason she chose it. The farther we go, the more piqued my interest. When Willow finally selects a door to push open, I freeze. There’s a dog sitting in the middle of the room. White fur covers it from its head down its shoulders, making the ugly lengthwise scar down its side more visible. I shiver, immediately guessing it had been completely cut in half at one point. It doesn’t seem bothered by it as it stands to its feet, letting out a little ‘yap’ that makes my bones rattle.

“How do you like him?” Willow asks from behind me.

I blink, trying to regain myself the same way I had after my first encounter with the zombie cats. “How long has this dog been dead?” I ask, staring at its shimmering outline. I expect it to jump into the shadows like Willow’s tiger but it doesn’t. Its stumpy tail thumps on the floor as it anticipates my next move.

“Not long enough to have any powers.”

“So, he’s just a regular zombie dog then? Fantastic.” My comment doesn’t damper his energy either. He stands to his feet and closes the distance between us, licking my hand when he reaches me. He comes up to mid-thigh on me but I don’t feel uneasy with him like I do with the tigers. There’s something endearing about his personality, sweet even. A smile lines my lips. Will I get to a point where seeing zombies is my norm? One look at my sister answers that question.

“What’s his name?” I ask, petting the length of the dog’s ear.

Willow smiles. “I was hoping you’d tell me.”

“You want me to name him?” I ask, letting my fingers sink into the soft white fur on the top of the dog’s head.

The dog looks up at me and I feel the ice melt on my heart just a bit. How can I possibly say no? “How about Kado?”

Kado yips again and I pretend he’s adding his approval.